The Settlement of the Africans in Jamaica


The first blacks of African ancestry, were brought to Jamaica in 1517 by the Spanish. They did not come directly from Africa but were either Africans who had already been enslaved in Spain, or the descendants of Africans who were enslaved in Spain. The Spanish began bringing Africans to their colonies after King Ferdinand, in 1501, authorized the governor of Hispaniola to import slaves of sub-Saharan African descent provided that they were born in Spain.

An excerpt of the letter from the Spanish Monarchs to The Governor of Hispaniola, follows:

Because with great care we have procured the conversion of the Indians to our Holy Catholic Faith, and furthermore, if there are still people there who are doubtful of the faith in their own conversions, it would be a hindrance [to them], and therefore we will not permit, nor allow to go there [to the Americas] Moors nor Jews nor heretics nor reconciled heretics, nor persons who are recently converted to our faith, except if they are black slaves, or other slaves, that have been born under the dominion of our natural Christian subjects.

The first Africans to arrive in Jamaica, that were brought directly from Africa, arrived the following year in 1518. King Charles I who succeeded Ferdinand, signed a consent allowing an annual supply of 4,000 African slaves to enter Hispaniola, Cuba, Jamaica, and Puerto Rico. This decision to ship Africans, directly to the New World, fundamentally changed the nature and scale of the practice. By 1611, Jamaica had a population of approximately 558 enslaved Africans, about half the population of Spanish settlers.

In Jamaica today, there are several locations across the island, such as Maroon Town and Accompong, that is home to Maroons. The lands they live on, were given to them by the British government "to enjoy and possess for themselves and posterity forever" (in the language of the treaty), at the end of the Maroon-British wars in the 1700s. The Maroons today, that occupy the lands that were given to them, are direct descendants of the enslaved Africans that were brought to Jamaica by the Spanish, five centuries ago.

In 1530, slaves in Mexico, Hispaniola and Panama revolted. Many fled to create independent colonies. The Spanish called these free slaves "Maroons," a word derived from "Cimarron," which means "fierce" or "unruly". Similarly, slaves in Jamaica escaped from the rule of their Spanish overlords to create camps in the mountainous interior of the island. The camps eventually became small settlements as more runaways joined, with the settlements evolving into a small communities of men, women and children living in relative freedom. The numbers were initially very small, with an estimated 107 free blacks in 1611.

The Arrival of the British

The Spanish ruled Jamaica for over a century and a half. When the British arrived in 1655, the Maroons chose to join the Spanish in fighting the British. Their knowledge of the mountainous interior of the island enabled them to mount an effective resistance that lasted five years with the British making little progress in securing the island.

There were four main Maroon polinks, or mountain farms, during the first ten years of English occupation. The main one was located in Lluidas Vale (also known as Worthy Park today), was led by a maroon named Juan Lubolo, later known to the English as Juan de Bolas. The British were able to persuade de Bolas to switch sides and fight against the Spanish and the remaining Maroons from the other polinks. The tide changed after that for the British. With the help of de Bolas they finally pushed the last of the Spanish, who fled to Cuba, off the island in 1660.

Juan de Bolas and his polink were rewarded for their alliance by the official recognition of their freedom and a grant of land, but the conflicts with the remaining factions of Maroons continued for another 80 years. Juan de Bolas met his death at the hands of rival Maroons. The number of Maroons grew during these years, as more slaves brought by the British ran away and joined their ranks.

The Africans under British Rule

Between the period of 1655, when Jamaica fell under British rule, to 1809, when the slave trade was abolished, an estimated 1,000,000 Africans were transported to the island, with ~200,000 re-exported elsewhere. Jamaica had become the single largest importer of African slave labor in the Americas. The Royal African Company was formed in 1672 with a monopoly on the British slave trade, and from that time, Jamaica became one of the world’s busiest slave market. Enslaved Africans soon outnumbered Europeans 5 to 1.

The table below shows the number of slaves that were transported directly from Africa to Jamaica from 1655 to 1809 when the transatlantic trade was abolished. As the table shows, there was a high mortality rate, with ~16% of those who embarked dying en route. 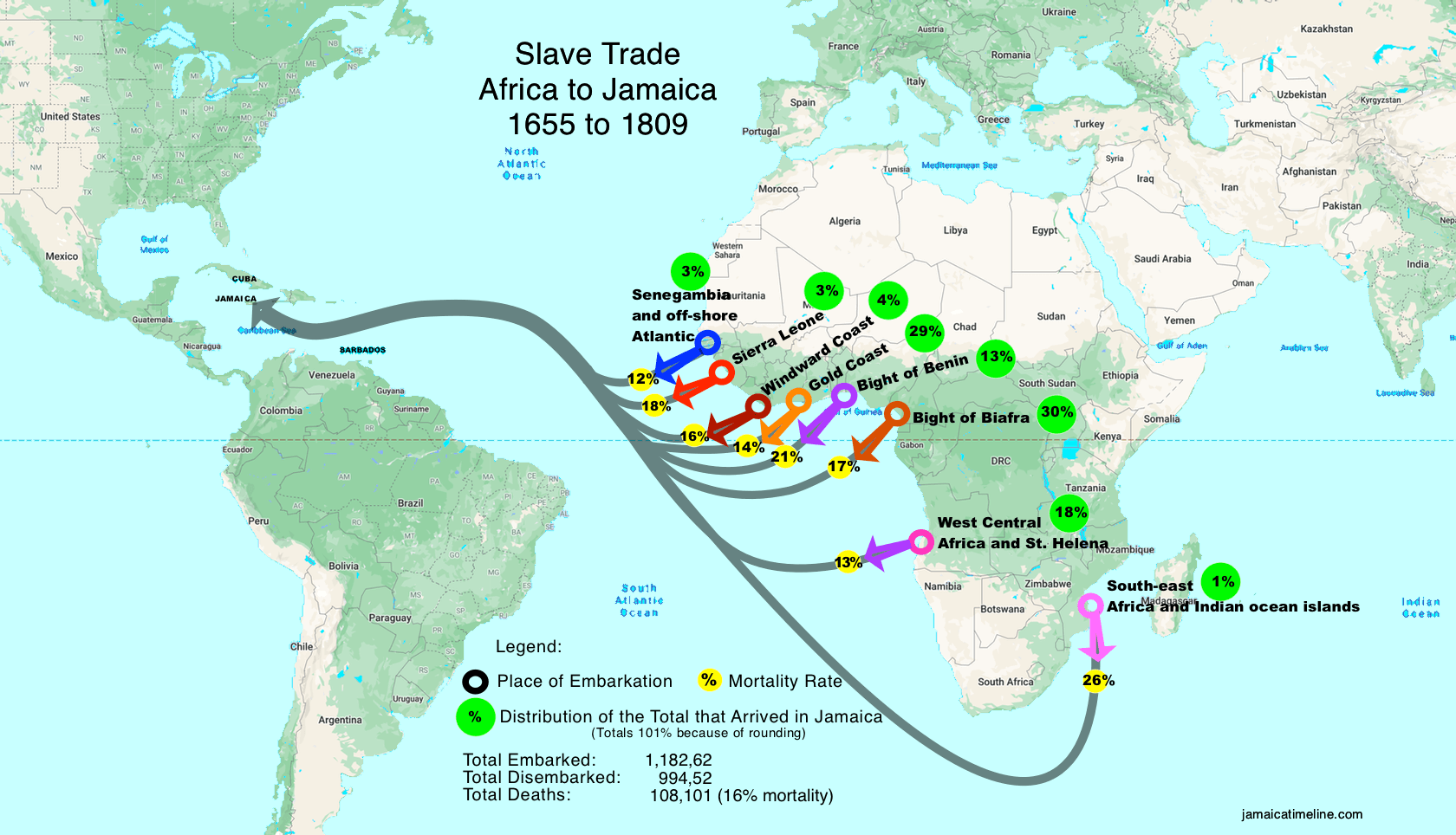 Developed from raw data pulled from the Slave Voyages Database. Percentages are rounded, so >100 for the distribution of arrived.

Breakdown of Embarkation Regions in Jamaica's Slave Trade 1655 to 1809

The table below shows the same data broken down by the regions in Africa where the slaves embarked for the journey to Jamaica. Additional row have been added to show the mortality rate by region of embarkation and the final distribution of the origins of those who made it.