The Timeline of the Jamaican People 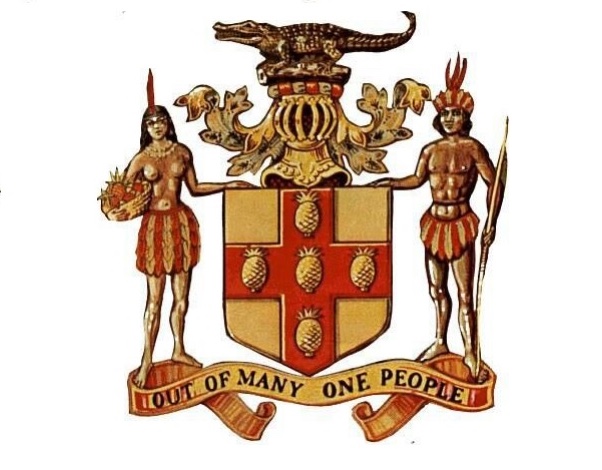 In 1962, the original national motto was the latin phrase "Indus Unterque Serviet Uni", which translated means "The Indians twain shall serve one Lord". It was replaced with the motto "Out of Many, One People" -- a tribute to the unity of the different cultural minorities inhabiting the nation -- when the Jamaica gained its independence.

The motto is represented on the Coat of Arms, showing a male and female member of the Taino tribe standing on either side of a shield which bears a red cross with five golden pineapples. The crest shows a Jamaican crocodile mounted on the Royal Helmet of the British Monarchy and mantling.


The Tainos were the original people of Jamaica who had their origins in the Arawak tribes of the Orinoco Delta in Eastern Venezuela. [more...]


The first black slaves brought to Jamaica in 1517 by the Spanish did not come directly from Africa but were either Africans, or the descendants of Africans, who as a race, had been enslaved for a time in Spain. [more...]


Jews of Portuguese-Spanish ancestry first came to the island around 1530, fleeing Spain and Portugal where they were seen as heretics because of their religion. Many more also came under English rule, during the period when the English were encouraging Jews to go to Jamaica by offering them full rights and British citizenship in the colony. [more...]


After a disastrous assault on Hispaniola, the English turned to neighboring Jamaica, which they knew to be weakly defended. They landed at Passage Fort in May 1655, Spanish Town was quickly overrun and the Capital claimed for the British. [more...]


The Irish arrived in Jamaica as convicts and indentured servants shortly after it was taken by the English. Within 10 years, many after serving their indenture, began to appearing among the lists of Jamaican planters and settlers. [more...]


The Scottish arrived in Jamaica as convicts and indentured servants shortly after it was taken by the English. By the mid-1700s, they were one of the largest group of settlers and land owners on the island, serving in multiple professions. [more...]


German settlers began arriving on the island in the late 18th century, but their numbers began growing in earnest in the 1830s when they came as indentured laborers after emancipation. [more...]


After emancipation and failed attempts to source labor through bountied European immigration, the Plantocracy turned to India and China for sourcing labor. About 36,000 East Indians, mainly Hindus, were brought to Jamaica over the subsequent years. [more...]


In 1854, a group of 224 Chinese immigrants arrived from Hong Kong destined for indentureship. Shortly thereafter, another group of 197 Chinese workers fearing yellow fever, was sent by the Panamanian authorities to Jamaica in exchange for Jamaican laborers. [more...]


The Syrians and Lebanese


Like the Jews, the Syrians and Lebanese came to Jamaica to flee persecution by Muslim Turks. The came from a region of the Middle East known as Mount Lebanon, which was then a part of Syria. [more...]